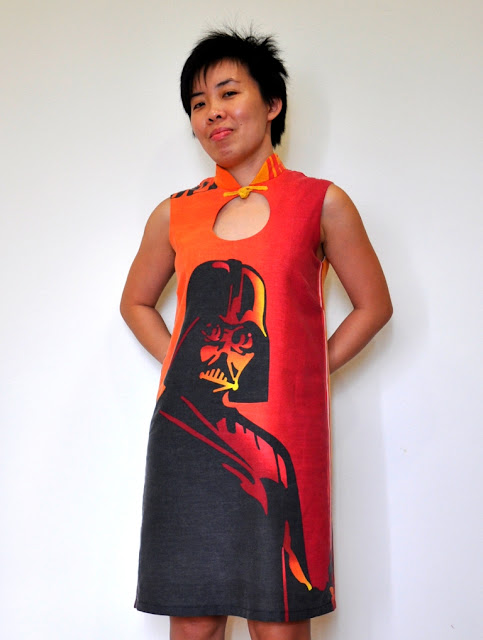 I wanted a dress to do the traditional visiting rounds in, for Chinese New Year. The traditional female dress for such occasions is the cheongsam. Well, this isn't a true cheongsam in that it isn't super tailored to my curves (I don't much want to show off the front curve anyway). Though I did make it a little oriental-inspired with the high collar and chinese knot (which I learnt how to do following multiple YouTube vids). 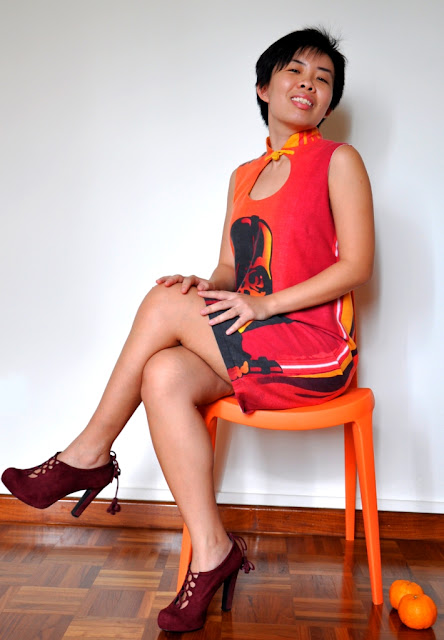 It's in auspicious red and orange colours, so it's very New Years-y indeed, never mind the Darth!! It was great, because all the non-traditional younger folk recognized him, and all the traditional old folk just thought it was a nice red auspicious dress. Hah!

I've never enjoyed New Year visiting - it's basically just going from house to house smiling stiffly, making small talk, and generally being respectful to seniors. It's not a meet-up at all, oh no. It's probably the modern equivalent of the victorian habit of 'making house calls'. But this year, I was giggling all the way - watching my kids receive their red packets from genial old people, while I strutted around the houses in my Darth dress, past all the open-mouthed youths who were too polite to comment (it's an asian thing). What ho! 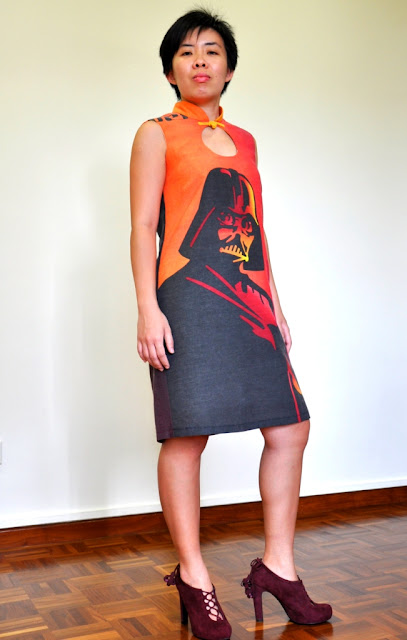 This is made from an old bedsheet off Ebay which wasn't cheap. I loved the Darth and the colour though. It's very well used, so it's all washed and a little faded, though super comfy. Darth was all up the lower right corner of the sheet, with flames across the lower left corner, and his name splashed across the upper left corner. I had to cut off his saber to fit him on my dress (boohoo!). I used bits of his name across the collar, and the flames for the back. The button was a leftover yellow bit, and I used leather cording inside to make the button puffy and stiff. 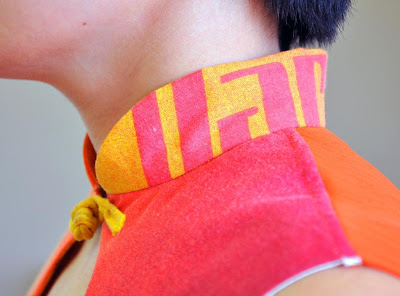 The cut-out was just for fun. I'm on a run with the cut-outs! 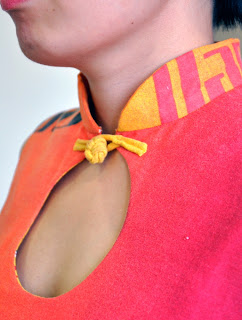 There wasn't nearly enough to make the whole of the back, so I covered up with a bit of orange chiffon. It was my first attempt with chiffon - the slipperyness was scary, and not being able to rip the seams also bothered me somewhat. But I'm glad to say it turned out ok. Just ok, not great. I need more practice with the curves. And now I feel a little sad that I didn't make a bigger, sexier see-through panel! Grumph. 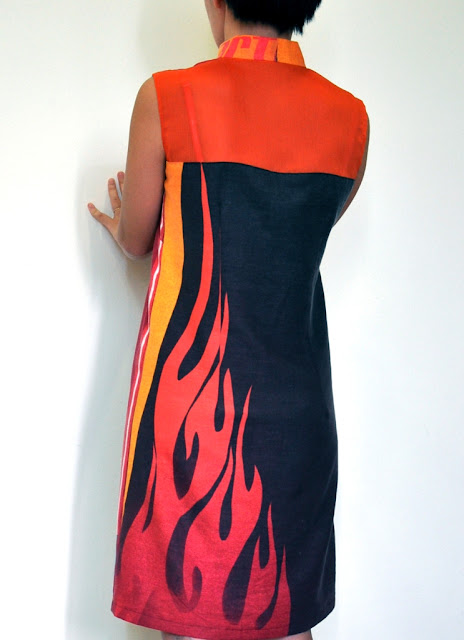 I used my trusty shift dress pattern for this again. I really like the way this fits on me, now that I've got it exactly the way I like. It hides many a flaw and is quick to sew, to boot. I'm in quite a dilemma now, actually - should I go for the 'signature style' thing, and make a wardrobe fill of shifts? I can think of literally a hundred different ways to sew this up. Or should I be brave, and challenge myself with another pattern, another material (KNITs! *shiver*)?

Here is the dress in action at First Aunt's house. I'm brandishing two mandarin oranges - the dialect word for them, 'kum', sounds like gold in the language. Yes, the Chinese are only concerned about money. Haha. 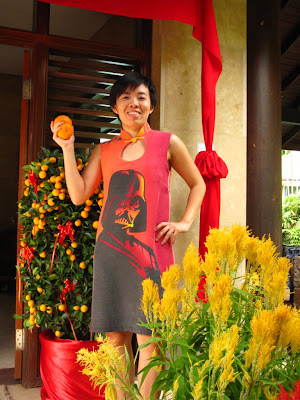 deborah
Singapore
It only either suns or rains out the window where I live. I guess I won't be sewing any coats.